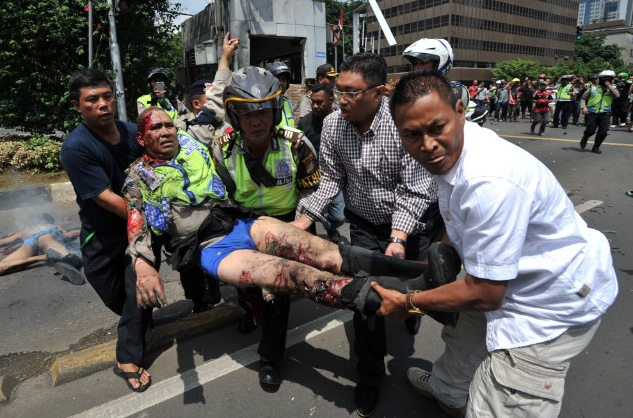 At approximately 1030 hrs, local time, on 14 January 2016, what is believed to be a cell of five terrorists launched an attack on Jalan Thamrin in Central Jakarta, the capital of Indonesia. The Jakarta bombings centred on the Sarinah shopping mall and office tower. The attack commenced with an assault on a police post outside the building and moved to the car park in the vicinity of a ‘Starbucks’ on the ground floor of Sarinah.

Reports are conflicting, however, the best estimate is six explosions were heard during the attack along with a sustained period of small arms fire during the assault that lasted a little over three hours before police gave the ‘all clear’ and declared the emergency over.

During the course of the attack, the police post was destroyed and all five attackers were killed along with two civilians, including one westerner. Again, at the time of writing, the nationality of the deceased westerner is unclear however the most reliable reports state the nationality to be Canadian (with a Dutch citizen seriously wounded). Reports of police casualties appear incorrect.

ISIS has since claimed responsibility for the attack and warned of more acts of terrorism are to come.

Click this link to listen to Panoptic Solutions discuss the recent Jakarta bombings with ABC radio.

The Psychology of Risk — An Interview with Dr Gavriel Schneider